A couple of weekends ago was the Melbourne Marathon and all the memories of running my first marathon in Melbourne 2014 came flooding back, so I thought I’d do a recap 12 months on.

I especially want to write this because people think I’m a natural runner and also because I’m petite I’m supposed to be very fast! Um, wrong  !!

I really have to work at it but one of my strengths is determination. If there is something you want, reach out and grab it with both hands. Dream big and make it happen.

I’ve always wanted to run a marathon. I remember being at school, trying to get into medical school and quite clearly saying that I wanted to run the London Marathon for the medical school hospital. And then I went to university and discovered alcohol and partying so exercise really didn’t fit into my life. I joined the rugby team but that was mainly for social reasons! I met a couple of people that had run the London marathon over the next few years and it was still in the back of my mind, but as I didn’t get into medical school and life took a different path I lost focus.

Then in 2010 I started running in an effort to get fit for the dragon boat nationals. I pretty much instantly knew that one day I WOULD run that marathon. It might not be London as we were now living in Western Australia, but I would run one. I started to plan which one I would run. I wanted to run a big one with lots of supporters and a great atmosphere. After all, I might only one run marathon so it had to be special, but due to funds and work restrictions it also had to be in Australia.  Initially it was going to be the Gold Coast in July 2013. A flat course in a great location and close to Byron Bay for a holiday after. I had it all planned; until injury hit in 2013 and put a halt to those plans. I had a chat with my podiatrist and he suggested Melbourne a few months later in October 2013. That would give me enough time to recover and train up. However I then got diagnosed with post viral chronic fatigue (read about that here) and suddenly everything went out the window.

In 2014 I finally started to get my health back on track and still had the Melbourne Marathon in the back of my mind. As the months progressed and I started to build my training up, I felt a marathon was in reach. I trained hard. It was a big year for me having run my first half marathon also. I took on a running coach to get me on track and with my half marathon time I felt my goal was achievable.

You see, the problem is that I had decided to not just run my first marathon but to put pressure on myself to run it in a certain time. I’m goal orientated and focused and this is what drives me.

Finishing a marathon was never going to be enough for me.

Marathon day came on Sunday 12th October 2014. I was SO nervous which is very normal for me before any running event whatever distance but I really felt I could finish this marathon in the time I wanted. My plans were slightly scuppered though when Melbourne turned on its best weather for the day.  28 degrees was not my ideal running temperature. As much as I like the heat I can NOT run in it. I’d seen the predictions coming up the week before so I chatted to my running coach, formulated a plan with him and changed the top I was going to wear to try and make me cooler. 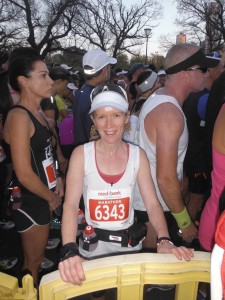 Smiling through the nerves just before the start!

I had decided (against my coaches advice) to stay with a pacer the group ahead of the time I wanted. I felt that this was feasible. I always run faster in a race than training sessions. But it became very clear early on that this was a bad idea! The pace was MUCH higher than the predicted pace for that group and I could not sustain it. I had 42.2km to go and knew early on it was not possible to stay with this group. I decided as long as I stayed with the next group I could still reach my goal.

But something happened that day.

By the time I got to the half way mark (21.1km) I was flagging and suffering. The heat was getting to me and I was way off my pace. I have to say I’ve tried to block out the next half. I know two more pacer groups passed me and each time this happened I cried a little bit knowing step by step that my dream was being destroyed. By the 30km mark (which is quite early on when you still have 12.2km to go) I was in agony. I was so ridiculously hot and decided I just needed to finish. And I did. I finished my first marathon. I saw my friends at the finish line and heard them shout for me. I just shook my head at them thinking, ‘never again’. I crossed the finish line and sobbed. I still had to tackle the crowds to get a drink and then find my husband at the pre-arranged point.

As soon as I saw my husband I was a mess. I just burst into tears. There he was standing in front of me with a big bunch of red roses saying, “I’m so proud of you, you’ve just run your first marathon’ and I was just sobbing saying, ‘I hated it. I messed up. My time was awful and I’m never doing another one’. I just could not stop crying.  My poor husband. He was SO proud of me.

We shuffled (quite literally) back to the hotel and went out for something to eat but I just kept crying saying I’d messed up and I just needed to sleep. Perhaps I was hoping when I woke up it had been a bad dream and I had actually achieved my goal. I had achieved my goal in so many people’s eyes.

I had run a marathon. Not many people do that. But in my typical A type personality, I had messed up big time.

That evening before we went out for dinner we went to a second hand book store and I bought a book called, ‘Keep on running. The highs and lows of a marathon addict’  My husband was in hysterics. He said,’ It’s not even 12 hours later and you’re looking at doing another one’.

Truth be told, I had a bee in my bonnet that I HAD to beat that time. I had to achieve my goal. And 12 months on, I still do. It’s not such a burning desire now because in January 2015 I ran my first 50km ultra-marathon which I LOVED. It was a totally different experience. I’m SO keen to sign up for another ultra. I’m not so keen to sign up for another marathon but one day I will. I applied for the London Marathon for 2016 in the ballot. I did not get in but it made my husband laugh that it was still on my wish list. In the meantime, I will keep on training. One day I will run another marathon and I will get my goal time. 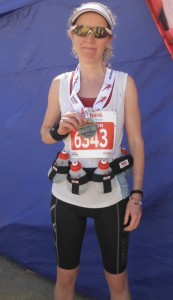 Trying to smile through the tears at the end!